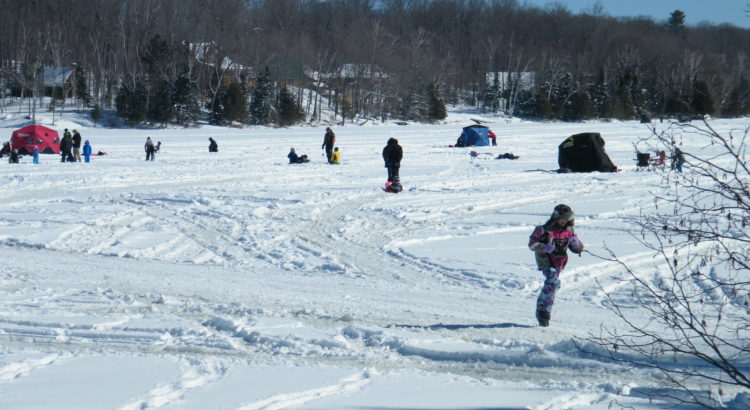 The Derby was created as the Children’s Ice Fishing Derby by Ernie Eddy in the early 1980’s.

Ernie, who was the treasurer of the St. Joseph Island Hunters and Anglers Association, recognized that children needed a safe and fun way to be introduced to the joys of fishing, particularly ice fishing. The first few derbies were held on the ice in front of Richard’s Landing as part of the community’s Winter Carnival. The derby was soon moved to Gawas Bay due to its sheltered location. In 1995 Ernie’s health was deteriorating, so he turned the Derby management over to the SHI Hunters and Anglers as an annual event. After Ernie’s death in 1999, the name of the Derby was changed to reflect Ernie’s dedicated work to its creation and continuation. In the winter of 2002, the Derby was moved to its present location on Twin Lakes, an inland lake on St. Joseph Island. This location at Twin Lakes offers safer ice conditions and takes advantage of the splake stocked in the lake as part of the Kala Project, another SJIHAA undertaking.

The Derby is a free event that goes from 10am to 2 p.m. on a Saturday in late February or early March, (see calendar f or this year’s date). The Derby is open to all elementary school-aged children. Volunteers are available to drill holes for participants, and bait and tackle are provided for those who need it. Hot dogs, donated baked goods and hot chocolate are also provided free to the participants. The species of fish caught include: splake, yellow perch, northern pike and brown bullhead.

At the conclusion of fishing, everyone congregates at the shoreline. Prizes are awarded to children who catch the largest fish in each species category. There is also a random draw of prizes, so every child goes home with a age and gender-appropriate prize.

The event is entirely free of charge.

The Derby’s success is because of its dedicated volunteers and because of the generous donations given by local and area businesses.

Photos: From past years